There were some perks to working at game store in the mid-90s. One of them was receiving tons of promotional tapes from publishers hyping their upcoming games. We had a few monitors along the ceiling and ran them all day. They seem to be a thing of the past now that demo kiosks are in every store. The downside to this job, besides low pay and dealing with the public, is that it meant working Sunday evenings when The Simpsons and X-Files were both still good. So when a video was outdated I usually brought it home taped over it. I ended up with a stack of VHS tapes large enough to build a fort. Despite moving four times since 1997 I hung on to a number of these. Not really sure why I bothered lugging them along, moving is always a hectic experience so I probably just didn't think about it. When my office/game room finally got too congested they were the first thing to go. Before tossing them I checked to see which were salvageable, the answer was "not many". Most were taped over and went directly into the trash. There were a few I intentionally saved, like the Sega Saturn and Sony Playstation launch tapes, that unfortunately degraded to the point of being unwatchable. The few oddball survivors I uploaded to YouTube before condemning them to life in a landfill.

Making of the 11th Hour

This fits into the "intentionally saved" category. It's ~10 minute tape that talks about how the 11th Hour was created. It was produced when full-motion video games were all the rage making it an interesting tape to watch.

This is a fairly short preview tape for Command & Conquer. Some of game designers dress-up in military fatigues and talk about the game.

This tape survived because it was incredibly short, something around 2 minutes total. I assume I didn't look at it before bringing it home and never bothered to throw it out. Other than the main character's corny name and mullet there's nothing noteworthy about this.

OK, not a full fledged "video game promo tape" because it's mostly productivity titles; there is some footage of Fury3 mixed-in at least. This is one of the many Windows 95 promotional tapes we received in 1995. It's worth watching if you can tolerate the horrible jokes scattered throughout. 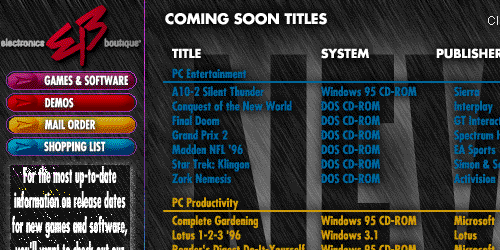