In all likelihood you've read the semi-famous thread by Alan Noon titled "Street Fighter the Movie Broke My Heart". If not, you should go do that now. It's a personal account by the co-designer of the slightly infamous arcade game, it's a great read even if you have no interest in Street Fighter. I've known Alan for a number of years now. His younger brother Rob has been a close friend since 1993 and was the best man at my wedding. It's through this relationship that I ended-up being a background character in Street Fighter: The Movie.

Back in 1994 Rob and I were both barely attending junior college. The few hours spent on campus were largely wasted in the smoky basement arcade. Fighting games were just huge back then and we buried a mountain of quarters into Mortal Kombat II and Street Fighter II variants. I met Alan around this stage in life as well. Being a fighting game fanatic at the time it was cool to know someone who actually worked on them. Something called Bloodstorm was his most recent game. It was fun but never garnered much popularity, that didn't stop us from tracking it down wherever it could be found and impressing onlookers by unlocking secret characters.

One day Rob mentioned that his brother was out in Australia shooting footage for an arcade game based on an upcoming Street Fighter movie. He made it sound like a secret project but who was I going to tell? A few months later Alan was back in town with all sorts of outstanding stories and photos from the shoot (most of it recapped in the referenced thread). Again, being hooked on fighting games this was really exciting to hear about. I'll admit to being envious too. Game programming was my dream career until I found that going the boring corporate programmer route pays the same with typically shorter hours.

A few more months later I received a phone call "Hey, my brother said he needs a couple sleazy looking guys for the background of that Street Fighter game and wants to know if we're free today" - luckily I had absolutely nothing going on so I jumped at the opportunity. Heck, even if I had something going on I would have jumped.

We carpooled down to the Incredible Technologies office. I signed an NDA (which I'm probably technically violating now) and was taken to their impromptu studio. It was lower-tech than what I expected. I didn't really know anything about anything so I imagined they had something close to a movie set. It was just an expensive-looking camera pointing at a blue screen that was barely wide enough for one person, looked like it was setup just a few minutes earlier. They took a few slow motion shots of us doing fist-pumps and that was it. Although brief, it made my afternoon.

Here's where I am in the game:

Apparently there's some code to blow my head up, it was even in GamePro or some equivalent publication.

That wasn't my last brush with the game. We were asked to come out and beta test it one warm night in 1995. We'd take turns playing while some guys with clipboards took notes. I guess it's not that different than the user experience testing I've had to sit in on during my own programming career (although the users aren't having as much fun). The game was a tad buggy at that iteration, I remember juggling a character in the corner infinitely at one point. Still I thought it was a pretty good game.

That's right, I thought it was a pretty good game. It's so easy to look at it now and laugh at the digitized graphics and mock it's transgressions from the Street Fighter canon. Back in 1995 it looked great, better than the original Mortal Kombat. The play mechanics, although mostly different than Street Fighter II, were solid. "Different" doesn't mean "worse" people. Yeah it kinda felt like a Mortal Kombat rip-off but it was fun. After playing ~4 hours that night I still wanted more. To this day I prefer it to many fighting games of the era such as: Killer Instinct, Mortal Kombat III, and Samurai Shodown. I will concede it didn't best Mortal Kombat II or Super Street Figher II Turbo though. Since those were the primary rivals it had something of an uphill battle.

After playing several hours of Street Fighter: The Movie we were invited to try an import Sony Playstation which was a few months away from being released in the states. Incredible Technologies wasn't developing Sony Playstation games, my recollection is this was something one of the developers brought in for late night stress relief. I briefly discussed that experience here.

When the game was released we searched for an arcade that had it... but only found a single location within a 20 mile radius. When we went to check it out there wasn't a single player. I didn't think the game would be a blockbuster, but I expected it to have some buzz. I guess the average Street Fighter fan just wasn't accepting of anything that broke the mold. The letdown continued when I found that the backgrounds were replaced for the home version. I'm far from grieving, but it would have been cool to appear on the Saturn and Playstation too.

I suppose there will be some who don't believe this story. My only rebuttal is: why would I make up something so utterly trivial and easy to disprove? For the rest, thanks for taking the two minutes to read this page.. and of course thanks to Alan for giving me an interesting story to share. 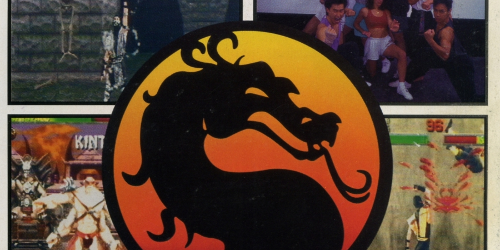 Mortal Kombat II Behind the Scenes