2012 was not a great year. Out in the Chicago area we had a heat wave most of the summer. Maybe "wave" isn't the right term for something that lasts three months? Anyway, it meant there were very few garage sales over the summer. Instead of seeing 10-15 signs a weekend I saw 2-3.

Also my game collection is starting to get out of control so I've been much more selective on what I buy. I probably saw ~200 PlayStation 2 and Xbox games for $1 this year and passed on nearly all of them.

I just can't pass on boxed AD&D games from the 90s, even ones like DeathKeep that haven't aged especially well. This copy still had the free phone card intact. Anybody remember that short-lived trend from the mid-90s? Since everyone has a cell phone now it's very antiquated, just like 1-800-COLLECT. I am so incredibly tempted to try it but also scared where the phone number will take me.

This was at Half Price Books along with about a dozen other NES games. I leafed through the manual and this doesn't look half-bad. Seems like it has some point-and-click adventure elements. It might be awful but it's worth a try.

First garage sale of the year

Thanks to either global warming or normal weather cycles we had a very early spring out here. The first garage sale I spotted was in late March and I found a couple cool items there. They had a boxed copy of Outlaws, including the hint book, for PC for $2. I never played it but it's a LucasArts game so it can't be bad. I also got a couple GBA-GameCube cables for 25¢ each. The GBA case was also 25¢ and I needed something to store all these cables in anyway.

Last year I found out there's a niche collector's market for cardboard boxed Genesis games. Seems incredibly specific even by my strange standards. I have no intention of ever getting into it myself yet here I am buying a cardboard box version of Monopoly. The really interesting piece here is the PlayStation Memory Card Reader which was produced by Sony. Nowadays it seems like something they would shun but maybe I'm wrong.

Hmmm.... "Works with Windows Millennium Edition" eh? I just might take them up on that offer.

This was another garage sale find. I always thought it was odd they chose the '95 editions for these franchises. Both had versions up to '98 produced for the Genesis, they would presumably be better. Diehard fans of the NHL series swear that '94 is the best installment though. So either way the '95 version doesn't make a lot of sense.

Here are a few more items from Half Price Books. The Nintendo book is the most interesting item, I rarely see ones this old there. Double Dribble is of course a very common game but I haven't seen one with the box in near perfect condition. That Atari collection is now the 300th one I own (plus or minus 150) but it was only a buck.

Like the last couple of years there are tons of cheap Xbox and PlayStation 2 games at garage sales right now. It probably won't last much longer so if you're interested in collecting either of those systems now is the time. I'm only after a few titles for each of them and by luck this was one of them.

Almost my greatest find ever

Like everyone else in the Chicago area, I head up to middle of nowhere Wisconsin many summer weekends. Those small towns would be so nice if they weren't filled with all us Chicago jerks. On one of my trips I paid a visit to a random antique store and almost had a heart attack when I saw a Microvision box on the shelf. For those unfamiliar with the system, it was the first cartridge-based handheld system and is extremely rare. I lunged across the store only to find the box was empty. I interrogated the staff and they said they never had the system, just the box. They only wanted $2 for the box though so the visit wasn't a total loss.

After leaving the aforementioned antique store I spotted a garage sale sign and hoped my luck would improve. When I got there I saw about 20 boxes of cassettes for 10¢ each, mostly 80s butt rock. I don't even own a cassette player but I had to look anyway. Glad I did because I found this priceless gaming item. OK, maybe not priceless but still neat.

Some additions to my Doom shelf

Alright, time to wrap up a pretty disappointing year with a decent find. I've been wanting to try this game since I first saw an ad for it 20+ years ago. There was a brief time when it seemed like every Kemco game on the NES was amazing. Unfortunately I never saw a copy back then and forgot about it until I saw it at Half Price Books for only $3. At least the year ended on a positive note. 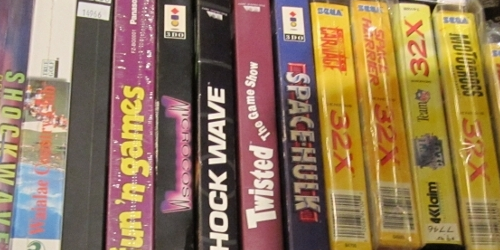