This was not a great year, I didn't get out much and when I did there weren't many games in the wild.

These were at an estate sale for a few bucks each. This isn't a bad mix of games though.

Is the PSP considered "retro" now? Either way, here are a couple clearance games I grabbed for $1 at Half Price Books.

Another clearance item at Half Price Books. I never played this one back in the day but will likely try it eventually.

Over the summer I took a little trip to San Diego. Nice city, maybe a little hot for me. Anyway, I wandered down to a part of town called North Park that features a number of eclectic stores. One of them had a few Super Famicom games for under $10 so I picked-up the ones that didn't require too much Japanese to play. This picture was taken at the microbrewery next door to the shop.

Wandering around my neighborhood one Saturday I found a couple good sales. One had a bunch of PlayStation games for $5 each so I bought ones I thought I'd play. At another there were a couple $1 PC games. I suppose Cinemania '96 isn't really a game but how could I resist?

Here's a weird one - I was driving around and saw a sign that said "Library Sale" but it was at a high school gym. Apparently once a year a local library takes all their donations/overstock and sells them at blowout prices. There were a ton of people there so I figure this must have been going on for a while and I was oblivious to it. I picked-up an odd mix of games and books there. Each of these were a dollar or less.

This I got for the low price of nothing. I was dropping off a few things at the electronics recycling center and spotted a fresh new copy of Visual Basic 6 there. Who would ever think to discard a treasure like this? So for the first and last time I ignored the "No Scavenging" sign and gave it a new home. 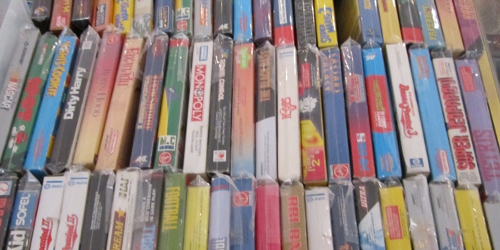