Alright, this one is going to be a quickie... no ramblings or offensive comments, I swear.

A while back I was going through a stack of old PC games to see which were on 3.5" disk so I could try them on FreeDOS. You know what would be great? If someone would make a 5.25" floppy USB drive. OK, the demand for it wouldn't be high but I bet it's enough to make a decent profit. If I get the itch to play an old game on 5.25" I have no choice but to download a, probably virus-laden, pirate copy. That's right, to play a game I legally own I have to download an illegal copy. I suppose I could jump through hoops to try and make a 5.25" drive work. By the time I was done reassembling my PC and persuading Windows to recognize it I'd have forgotten why I was hooking it up in the first place. My point is I shouldn't have to do anything except drop $20-$30 on a USB device. The 3.5" floppy USB drives are still around despite that also being a dead media. From what little I've read it's somewhere between impossible and hopeless to try wiring a 5.25" drive into a 3.5" floppy USB device. I recently got an equally obsolete 100mb iomega zip drive to work in a USB hard drive enclosure without any special effort, no time to explain why I did that. The zip drive had an IDE interface though so I guess that's not a valid comparision. Look all I'm saying is please, somebody please, make a 5.25" floppy USB drive.

Well so much for the "no ramblings" promise... I'll try to keep the other one. So anyway, while going through old games I found this Konami catalog. Here are some scans and stuff:

Front Cover: Look at that, a 5.25" floppy disk. Something you can't use via a handy USB device.

Mission: Impossible and Riders of Rohan Riders of Rohan was the game I found this catalog in. The box clearly said it was on 5.25" disk but I looked anyway hoping it was a misprint and actually contained 3.5" disks. Nah, it doesn't look like the greatest game ever made or anything but I still wanted to give it a try. Oh well, off to search adandonware sites for it.

Champions and Spacewrecked: That Spacewrecked game might be worth a try too. Although it sounds like they took a bunch of random ideas from other unfinished games and crammed them all together. On second thought, it's probably terrible.

The Simpsons: So here it is, the only home version of the Simpsons Arcade Game. It's not even on an arcade collection that I'm aware of (because I'd own it if it existed). This has to be the most popular arcade game to never receive a console version.

Teenage Mutant Ninja Turtles Manhattan Missions: I remember this game... it's the one where the turtles move to Manhattan to try and make it big. They don't at first and have to go get demeaning jobs. Eventually Donatello gets hit by a car, wakes up with amnesia, and starts working at an ad agency for some reason. When he finally meets the other turtles again he recovers his lost memories and marries April. What a great game.

Teenage Mutant Ninja Turtles: I totally forgot that the NES version of TMNT was a port of the PC version - or was it the other way around? Yeah, the NES version came out in 1989 so unless this is an old item it must be a port of the NES game. The TMNT arcade game is another one that didn't make it to any consoles until the Xbox Live Arcade.

Speedball 2 and Rollerbabes: Next up, two made-up sports games. Speedball 2 enjoyed success on a variety on systems. Rollerbabes, on the other hand, enjoyed complete obscurity.

Back to the Future III and Baseball Card Collector: Two things I have absolutely zero interest in.

Classics: My high school calculus teacher was a two time Jeopardy! winner. One of the questions he didn't get was about Predator 2... which might have been the only question on that episode that I did know the answer to.

Back cover - coming soon: I'm as surprised as you to find that "Lure of the Temptress" was indeed the final name for that game. Anyway, the address on the back here isn't too far from me. It's still an office park but Konami has moved west. If you've lived out this way for a while you'll also notice the "retro" 708 area code for the north suburbs. 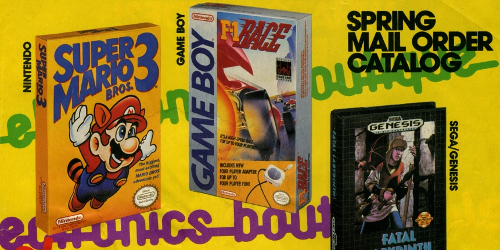 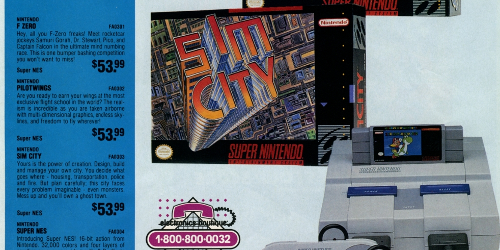 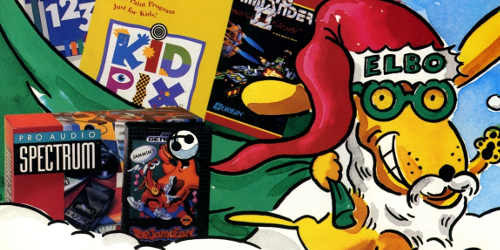