I was on a weekly retro gaming podcast for 9 years. Some people liked it I guess. Then it abruptly ended due to events outside my control. I don't really have anything to say about it. If you're reading this in hopes of learning more, sorry. I know how weird this sounds but don't assume I know much or even anything more than whatever the former lead of the show said publicly about it.

With that done I've been debating whether I want to undertake another podcast. At least 5 people contacted me after my last podcast ended to see if I was alive, that's a hard audience number to ignore. Podcasting is a lot more work than just talking for an hour. A 90 minute weekly podcast takes up about 6 hours a week total. There's stuff like planning, editing, managing a site, dealing with trolls, and adjusting microphone levels. I can't deal with all that for years on end again.

After some internal debate I decided on a few ideas for limited-run podcasts that I'd be up for. Please note, some of these sound like jokes but I am 100% serious about all of them.

The American Falcom Experience: Review of every Falcom game released in the United States in roughly chronological order of original release date. For example - there wouldn't be three episodes about Ys III but one that covered all three US releases after the Ys I&II episode. This is a series that would last about 20-25 episodes.

Sega 32X game by game podcast: I really like this idea but might realize it was a horrible mistake after 5 episodes, or maybe only 2. This would be at most 41 episodes to include all releases and a final one covering prototypes.

Pro-wrestling game and PPV thing: Simple premise - review an old pro-wrestling game and the PPV that it's closest to. Topics can also include a discussion on which wrestlers were out of that promotion or dead by the time the game was released. This is a bigger series than it sounds like, there are 34 games during the Monday Night era alone.

Life on a Stick episode by episode podcast: You remember Life on a Stick right? It aired on Fox in 2005 and has 13 episodes. It was kinda funny. Or at least I recall it being funny, maybe I was wrong, let's find out. This would last exactly 13 episodes unless there was a "where are they now?" bonus one at the end.

Classic Phantasy Star podcast: This covers the first four games, maybe some fan works related to them, and fan translations of 8/16-bit Phantasy Star games that weren't released in the US. I actually considered this idea seriously enough to write an outline for it many years ago. I was originally picturing a weekly 30 minute show, now monthly sounds a lot better. Or annual, whatever.

Sony PlayStation Launch: This is set in September 1995 and runs through December 1995. It's the only semi-theatrical one as it's intended to sound like what a PlayStation podcast would sound like in 1995 if such a thing existed. This could be anywhere from 10 to 20 episodes, preferably closer to 10. Hmm.. the more I think about this one the less I like it. What if instead it was some "found" recordings of something that played over the audio system of video game stores in 1995? It could be like Night Vale but in a 1995 game store and with a coherent story. 1 episode for each month of 1995 then.

Last Issue podcast: We review the last issues of various video game and technology magazines. Or the first, who cares? This is loosely inspired by a short-lived podcast that reviewed the finales of TV shows. I'd ballpark this this at 20-30 episodes.

Town Music podcast: We listen to town music from RPGs and pretend to be happy. I briefly considered doing this as a solo show and had no problem getting 30-40 episodes outlined.

And finally... some sort of retro shuffler podcast where we switch between these topics with complete disregard for whether the audience would enjoy that.

If anyone is interested in doing one of these let me know and we can talk about whether it's really a good idea.

If I ever do a podcast again, and it's sort of unlikely all things considered, the number one thing I would do differently is getting some kind of "social media manager" on the team. Anything involving social media was my least favorite part of having a podcast. It's just not my thing. I get that having someone post fun stuff and engage with people every day would be a great way to attract listeners and keep existing ones engaged. I just don't want to do it myself. I'm completely off social media personally and not creating new accounts so I can promote a podcast.

Getting back to the "it's sort of unlikely" comment for a moment.. although I was disappointed at how my last podcast ended the timing was at least good. As we approached the decade mark I had frequent thoughts about quitting the show at that milestone. I never had naive delusions that the podcast would be huge but was disappointed at the downward trend we were on. At our peak we averaged ~2,000 downloads an episode. That's a tiny fraction of what a popular show gets but was a number I was elated with. In the last 2 years of the show that number started declining and by the end was at ~1,200 downloads per episode. I could see it getting below four digits soon. For the number of hours put in I'd like a little better response than that.

Some of that decline was likely due to the previously noted disinterest in promoting the podcast over social media. The audience of any podcast is going change over time, people stop listening for whatever reason. To keep it going we needed to attract new listeners to replace the ones that left. We didn't do that.

I'm also comfortable accepting that the problem could be me. On this site I tend to post things that interest me and don't really think about whether they're interesting to anyone else. Running a podcast that way is probably not a formula for success. As time races by I find myself increasingly less interested in trying to entertain complete strangers so this tendency of mine is only going to get worse.

I know there were a few people my old podcast had a profound impact on. I know because they told us. I don't mean to disregard them with these comments. If any of them are reading this please know I appreciated your support. There were definitely a few days when I didn't feel like recording a podcast but didn't want to let our most enthusiastic fans down.

So.. this article about podcasts I might consider maybe recording has morphed into a "talking myself out of ever doing another podcast again" piece. I don't know where this all goes from here. Either one day I feel inspired to start again or I don't I guess. If you've read this far then my apologies for turning this into a self-therapy session. 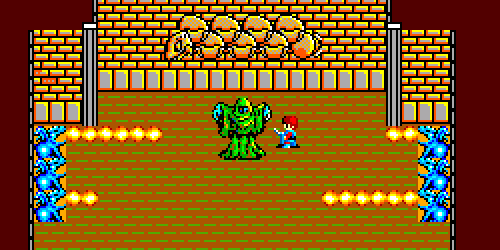 The American Guide to Falcom Games