We all like to think we're smarter than everyone else. We all believe that we make our own decisions and no one else's opinion matters. If we think X is better than Y it's because we've careful analyzed both options and arrived at that conclusion of our own accord. We'd never admit that we thought X was better than Y just because everyone says so. No way man, we think for ourselves.

Then let me be the first to admit it: My name is Hugues Johnson and I've spent the last five years thinking the rumble feature made video games better. I figured that if everyone else thought it was cool to have their controller shake uncontrollably then it must be. I mean, why would every single game support it if it didn't improve the gaming experience? Well, it turns out I was wrong. The rumble feature is in fact awful and I'm encouraging all gamers to take a second look at it.

Note: This is not meant to provide a comprehensive history of the rumble feature. This is based entirely on my own experiences and opinions.

In 1997 I was behind on the gaming scene. I was in college full-time and managing a crappy bookstore at night. I didn't own a Sony Playstation, Sega Saturn, or Nintendo 64 (N64). I couldn't afford any of them and didn't have a moment of free time anyway. That December I took a second, seasonal, job at an Electronics Boutique/EBGames store. It was at that store where I would first encounter the recently released N64 Rumble Pak.

Being Christmas season, the first party accessories regularly sold out. We'd get 6-10 Nintendo brand N64 controllers every week and they'd be gone in day. We also carried a plethora of third party controllers to augment the selection. Their buyers were either parents looking to save a buck or gamers truly desperate for a second controller. The latter was especially the case the week after Christmas when proud new N64 owners flooded the store to stock up on add-ons.

The Nintendo brand Rumble Pak, like the control pad, was also tough to keep in stock. They'd fly off the shelves so shoppers would have to resort to knock-offs with names like Tremor Pak, Jolt Pak, Vibra Pak, and The Destroyer. Hmm.. that last one might have been something I saw at a different store. Anyway, the only thing these knock-offs had in common was the missing letter 'c' which was their contribution to fighting childhood literacy. My first impression of the Rumble Pak was "Well, this looks pretty lame". Maybe I was stuck in the arcane ways of 1995 but I thought a shaking controller was an irritating idea.

I was a late N64 adopter. Two years later my girlfriend/future wife bought me the Donkey Kong N64 bundle set for Christmas. Having just wrapped up my undergraduate degree, but not yet started graduate school, I had time to get reacquainted with video games. I began with Donkey Kong 64, rumble free. At no point while playing it did I think "gee, this would be better if the controller shook every time I did anything". I was content to play N64 with a huge gasping hole in the back of the controller.

Then came Ocarina of Time. OK, it had been out for a couple of years by the time I finally played it. Regardless, I thought it was the best game I ever played. It still might be. About mid-way through the game Link is given an item called The Stone of Agony. It's shaped exactly like a Rumble Pak and, you guessed it, causes the controller to vibrate every time you're near a secret. "Those bastards at Nintendo" was my reaction. They were taunting me "Sure, you don't need the Rumble Pak to finish the game. You can play without it if you don't want to find all the secrets. But you want to find everything, don't you?" I surrendered a small piece of my free will that day and bought a Nintendo Rumble Pak.

I popped it into the controller and immediately noticed a difference. When the Ocarina of Time title loaded there was a slight vibration as Epona galloped across the screen. It started light and built as she ran closer. "OK, that's kinda cool" I thought. As I started playing the novelty wore off though. Every hit, bomb blast, fall, bump into a tree, and of course horse ride jostled the controller. It got old pretty fast. Yet, I stuck with it. After all, I just had to find all the secrets in the game. Over time it became like a background noise, something that was always there that I largely ignored.

Yet, I never removed it when playing other games. My original rationale for buying it was because Ocarina of Time semi-required it. Either I was too lazy or just reasoned that it somehow made the games "better". I never considered that developers just added rumble support because everyone else was doing it. Hell, I was writing code at Mercator Software at the time and saw other developers do the same (albeit in a non-gaming industry). I remember someone wanting to add SOAP to one of our programs just because it was the latest new buzz technology. Maybe I thought game companies, with their notoriously aggressive deadlines, would avoid adding unnecessary features like this. Whatever the case, I now accepted the rumble feature to be a standard piece of the gaming experience.

Sony would go on to add an embedded rumble feature to their Playstation controllers. The Sega Dreamcast, like the N64, had a slot in the controller for expansion cards. A rumble pack was inevitable. By 2001 it was an expectation. Every console system offered it in some form and every game supported it.

A couple of years later I bought the Gamecube at launch. In hindsight I could have waited because I didn't even play it for nearly a month (roughly the same reason I have yet to buy a Wii). Like the Playstation, the Gamecube worked the rumble right into the controller. No dropping and extra $10-$15 on an add-on, it was just always there. Sure, most games had a menu where you could disable it but who ever bothers. I gleefully played through Luigi's Mansion, Wind Waker, and Simpsons Hit 'n Run while possibly increasing my risk of developing arthritis.

When the Microsoft Xbox launched it also featured native rumble functionality in the controllers. At this point we were all participating the in the shared delusion that our shimmying joypads were a good thing. We would have thought it absurd for a system to be missing it.

In 2005 I fired-up the ol' N64 and started playing through Donkey Kong 64 again. My daughter took a liking to Tiny Kong so we spent some time together romping through DK Isle. The Rumble Pak was still connected and it felt normal now. Something that once irritated me was now customary, maybe habitual.

In 2006 something great happened. Well, "great" is stretch but I'm trying to build to an apex here. My Gamecube controller broke. It was the only time a first party controller ever outright broke on me. I have Super Nintendo and TurboDuo controllers that are darn near worn out, but never one that just stopped working. It developed some weird c-stick behavior. When a game started the camera would spin wildly like the c-stick was being held. After a couple reboots the problem would sometimes go away. After reading some glowing reviews about the Nintendo Wavebird controller I decided it would make a suitable replacement.

The thing about the Wavebird is, it doesn't support rumble. Maybe it messes with the wireless sensors, maybe it drains batteries too fast, maybe it makes the already heavier-than-average controller too bulky.. don't know, too lazy to research it. Strangely, I was initially disappointed by this. That's right, disappointed, as though I was now losing something. I think I developed Stockholm Syndrome for the rumble feature.

Luckily I was cured of this addiction rather quickly. Not owning a Wii, and having a craving to play a Zelda game, I dropped-in the Gamecube Zelda collectors disc and fired-up Majora's Mask. I played through this game in 2001 and had long forgotten all the secrets so it was like starting anew. Majora's Mask, like its brother Ocarina of Time, has the "if you stand next to something secret the controller shakes" thing going. It also kicks-off the rumble when you bump into something, get hit, and so on. With the Wavebird controller it was no longer an option to feel all this rumbliness. You know what? The game was better without it. That's right, all this time the rumble feature was getting on my nerves and I ignored it because I was supposed to like it. I assume this is the same reason people buy Eminem CDs. Now free from its grip, I found every Gamecube game I owned more enjoyable. After all this time it turns out my first impression of the Rumble Pak some nine years ago was dead-on. The rumble feature is lame.

There have been some recent setbacks to this gaming annoyance. The Nintendo Wiimote supports vibration but with severe consequences to battery life. I'd imagine most gamers will turn it off and re-discover the joy of a non-shaking controller. Sony lost some patent battle and had to pull it from their Playstation 3 controllers. This would make me optimistic but I've heard some gaming podcasts and read some reviews that lament the absence of "force feedback". I was disappointed that none of them found games to be less irksome without it. I suppose Sony will eventually have to invent some replacement. After all, the Xbox 360 has the embedded rumble feature so it's just a matter of time before Sony decides to keep up with the Joneses.

I'm still hoping to win over a few converts though. Here's my challenge to you: turn off the rumble feature next time you fire up a game. See for yourself if all that vibration adds or detracts from the game. If you honestly think it adds to the game, yeah I think you're nuts, but at least you gave it a try. I think many of you will find that you've been brainwashed into believing that the rumble feature is an essential piece of the gaming experience. Something that probably tacks on $5-$10 to today's pricey controllers. Perhaps you will join me in wishing good riddance to this lame idea that has long outlasted its stay. 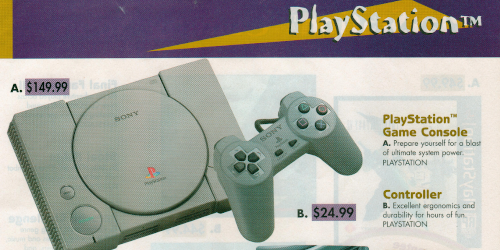