This is the last catalog I'm scanning. Now, I said this on the last three or so catalogs I posted too. This time I probably mean it. I held-off on this one for so long simply because of the cover. I get that Barney was kind of a big deal in 1997. There wasn't any crossover with the average Electronics Boutique customer though. The company spent the 1990s slowly transforming from a software store to a video game store. In neither of those incarnations was it a place you'd expect to find young children's toys. All I can think is that Microsoft went all-in on this Barney idea and paid to be on the cover.

Naming a pinball game "Balls of Steel" is the most 1997 thing I can think of. All it's missing are some flames on the cover.

I always think of Fallout as being a newer series than it is. If you asked me five minutes ago I would have said it was released in 2002.

To anyone reading this who regularly contributes to MobyGames: Terry Bradshaw Fantasy Football does not appear to have an entry there. I think I contributed credits for 2-3 games there so I obviously I could remedy this problem myself if I thought it was serious.

I bought a Pandora Directive/Under a Killing Moon bundle on Steam for well under a dollar. They were part of an FMV bundle of maybe 12 games for possibly $10. I can't explain why I enjoy 1990s FMV games so much.

There is a solid 10 year gap between Faery Tale Adventure and its more menacingly-named sequel.

Here's the war and board game page.

So it turns out "Forbes Corporate Warrior" is a first-person shooter and not a business simulation. That's uh, yeah, that's something.

Neat, a racing game called "Pod" two years before The Phantom Menace. Also those triangle-shaped boxes were the bane of every Electronics Boutique employee's existence.

It took me 23 years to connect that Betrayal in Antara is based on the Betrayal at Krondor engine.

I haven't had a lot to say about these pages so far, maybe you prefer it that way, but here's where things are going to change. $400 for a digital camera in 1997 was... I'm legit surprised it was that low. Sure it's like $2.4 billion after inflation or whatever but I was still expecting to see a $999 price tag on it.

In case anyone is curious why early CD game systems didn't have copy protection, here's your answer... $500 for a CD writer and $7 for a blank CD. Both of those were relative bargains compared to just a couple years earlier.

"NASA-proven Game Controller"? What does that even mean? They aren't flying the space shuttle with it I'm pretty sure.

"Mouse in a Box" wins the award for most accurate product name. At $39.99 the "Internet World Talk Phone" seems incredibly cheap for the time. Then again, it's an Interact product so it's likely junky.

Finally, the Barney payoff. Here it is folks, a doll that interacts with your PC in some way. That's exactly what you want right? Your young kids messing around with your $2000 computer, what could go wrong?

The art on that Logical Journey box is downright terrifying.

Up until a couple weeks ago I had two copies of Mario Teaches Typing 2 because clearly something is very wrong with me.

When I was roughly 10 I thought Paleontologist was the coolest-sounding job on Earth. 10+ years later the planet has dumbed-down to calling it "Dinosaur Finder". Did they think kids can't handle the word Paleontologist? They totally can. Yes, I know it appears in smaller print on the box, that's not my point.

There are still a lot of pages before we get to video games. I'm didn't make this catalog but I apologize for it anyway.

The first dent in the overpriced encyclopedia business came in CD form. $84.99 is a total rip-off for sure but also another relative bargain for the time.

The first release of rsync was in 1996, that does not bode well for DriveCopy's future.

System Commander was kind of a helpful tool at the time.

I know you're expecting a comment about the $75 web browser but the really interesting thing to me here is the $30 Usenet reader. I am not familiar with Gravity but did drop $20 for Newsbin. I assume the Net Accelerator program is just an image caching thing.

I'm beginning to worry these productivity pages are never going to end. They feel like half the catalog even though they were like 10% of the store's shelf space.

WordPerfect 8 and some other stuff. Only like 200 more pages before we get to the Nintendo 64.

OK, I think we've reached the end of this section.

Alright, now for the stuff you actually came here to see. I bought Starfox 64 around 1999, by then it thankfully did not include the rumble pack but instead had a soundtrack CD. That is an excellent trade-off in my book.

I predict this will be the most shared page in this catalog. Specifically in articles or forum posts about the prices of games in the 1990s vs today. It's really hard for me to argue that any of these are bad deals for the time.

Let's talk about versatility for a moment. Fall of 1997 are the final months of the Super Nintendo. The official last release was just around the corner. Still featured in this catalog, after 6 years, is Sim City. It's a launch game that is still being sold up until the end.

Final Fantasy VII at $49.99 seems like an incredible deal at this point. I know I can get it on the Switch for like $8 or whatever. I'm saying for the time it's an awesome deal for a new release. Just moments ago we saw Nintendo 64 games for $79.99.

I got into the PlayStation kind of late. Which is weird since I worked the launch but there's a good explanation. Anyway, it means I missed out of all of these titles. I played like 30 seconds of Crash Bandicoot in Uncharted 4 and was terrible at it.

How's the Saturn doing in 1997? Well, it's been given less space than the Super Nintendo and has to share with the other near-death Sega systems.

I will be eternally baffled at how there are multiple Clay Fighter sequels.

This is apparently the franchise page.

I doubt that in 1997 anyone expected this Persona game to be a huge deal 20+ years later. I never played it when it was new. Going back and trying it now is rough. I have to get myself into more of a 1997 mindset before I try again.

If you enjoy pre-release box art then this is the page for you. I'm counting at least four.

Some other early PlayStation games are dropping down to $24.99 now. Wrestlemania: The Arcade Game is a darn fine deal for the time here.

There's something really weird about Working Designs being the publisher for Sega Ages. I'd really like to learn how that came to be. Was Sega like "nah, we don't want to publish our own game in the US but if you want to then go for it"?

The Fight and Flight joystick is a neat idea. Really, I mean that. It's probably not very good but the idea is solid.

I have an Eclipse Pad. It is not a good controller at all. However, the original Saturn controller was so bad that it feels like a huge upgrade.

Everything on this page is junk. At some point I've owned every one of these controllers via garage sale finds and they're equally terrible in different ways. Although they are all 1000x better than the Retro Fighters Brawler64 which I stupidly backed. They then sent me a defective controller and replaced it with another defective controller. The cheap Interact controllers at least minimally work.

This is it for the main catalog. All that's left is the insert. I'm sure there's nothing interesting in that.

I completely never heard of the Monorail PC and now it's my life's goal to own one.

Let's finish this off with... some total nightmare fuel, what is that? What. Is. That. Like is he going to come to your house if you don't buy something? I don't think I'll be able to sleep tonight. Thanks Elbo catalog person. 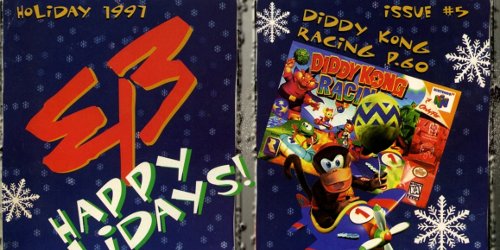 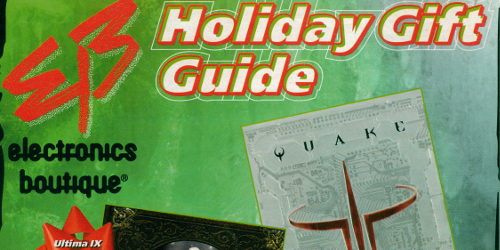