I'm writing this shortly after Nintendo announced the demise of the Wii U & 3DS eShops. They might backtrack before I upload it. I'm willing to take that chance.

Along with the announcement they created a site to celebrate the systems. I think this means they're serious about the shutdown. It feels like someone telling you they just ran over your dog but they made you a cake. This little site shows the games we all played the most on these systems. I'm a total sucker for things like this. Here's what I got:

Wow. OK. That is way off. Fine, it's "technically correct" in some narrow way but it's completely wrong too. I've literally never played Minecraft for example. So how did this happen and what are my real most played games?

I didn't plan to ever write a tribute to these systems. That's covered in my 2010's gaming recap. The Wii U and 3DS are polar opposites. One was a failure by Nintendo standards and the other a massive success. They existed at the same time. Like the Super Nintendo and the Game Boy. Or the Nintendo 64 and the Game Boy Color. Or the GameCube and the Game Boy Advance. Or the Wii and the regular DS. Nintendo had decades of success pairing a home console with a portable console. That finally broke with the Wii U and 3DS.

The Wii U never caught on. It was ahead of its time and behind its time. The idea of a controller with a screen of its own wasn't 100% new. The Dreamcast did it before and probably something else I forgot about. The Wii U upped the ante by having a controller that was essentially a separate console. The games could be played right on the pad while the TV was busy doing something else.

That would be fine if it didn't exist in an era of iPads and Android tablets. The Wii U pad was bulky in comparison. It also couldn't be played very far from the base console. The controls were better for non-touchscreen games, it had that going. Otherwise the hardware seemed outdated.

The 3DS continued Nintendo's tradition of crushing technically superior portable systems. The Vita had PlayStation 3 quality games and couldn't compete. Part of its success is that it never tried to be anything but a game system. It turns out that's what people want in a game system, a thing that just plays games.

Back to these most played stats now.. I see my problem right away for the Wii U. Until Breath of the Wild was released I only had a single account on the system. The weird single-save thing forced me to setup accounts for my kids to play Breath of the Wild (until they got Switches). My youngest kid played a lot of Minecraft, a lot. It's not my thing but I understand the appeal. It's a stealth educational game so I didn't mind all the hours being logged on it. I'd be a hypocrite to criticize anyone for spending hours on a video game anyway.

All the Breath of the Wild hours - that's me. I came as close to 100% as I could. I found about 2/3 of the Korok seeds and called it a game. It was my favorite game of all time within the first hour I played it. I'm surprised the number of hours is that low. I realize it's over an hour a day for a year. Breath of the Wild was released in the first week of March. In my area we don't really have spring, more like Winter II: The Revenge that ends in early May. I logged 10+ hours every weekend for two months. That's 60-80 hours easily. From there it was about an hour a day until I finished it.. over Labor Day weekend in September. Seriously, I wanted to complete all the optional things before fighting Ganon. That's many months of exploring and completing side-quests. The later DLC content added another 10-20 hours maybe.

Wind Waker HD is definitely number two for me. It's another game where I tried to do all the things before facing Ganon. I did all the things in the GameCube version and a decade later it felt new. Twilight Princess HD was likely 3rd then. I didn't try to do all the things in that but did most of them. Twilight Princess is a strong Zelda game. I'll say it has my favorite boss fight in the series (Stallord). I wouldn't complain if the art style was used again. It lacks the free exploration of Wind Waker and comes across as a much shorter game for that.

As for my 4th and 5th most played games on the Wii U... that is difficult. I didn't play many long games on the system. The near total lack of RPGs is a big factor. Earthbound on the Virtual Console might be 4th or 5th just by being a long game. NES Remix 2 is another I know I spent a while on. The bonus modes kept me coming back to it more than the first NES Remix. Every other game is at most in the 10 hour range.

The 3DS stats are a little harder to get my head around. I think they mean I only linked my Nintendo account to one of my DSs. Yeah, yeah, yeah. Multiple DSs, say whatever you want about me.

When the DS launched I wasn't interested in it. I thought it looked clunky. I thought it would flop, my worst gaming prediction ever. I had a Game Boy Advance SP and a growing backlog of games for it. I had a 1 year-old at home and keeping-up with the latest gaming hardware was like #100,000 on my priority list.

The DS Lite was a different story. When it was released the DS was thriving and I was officially totally wrong about it. The new form factor was a huge upgrade. It was all sleek and compact. If Nintendo ever makes some kind of DS Classic Mini it should use the same molds. I spent some serious hours on that. Phantom Hourglass and Chrono Trigger being the leaders. The latter easily racked-up more hours than everything on my 3DS list. It's definitely my most played DS game.

I later bought the DS XL because.. No real reason comes to mind. Maybe I wanted a larger screen. I passed on the 3DS at first because, well, I thought it would flop. Not the DS as a whole, just the "3" part. I thought it was a fad that would pass and Nintendo would revert to something like what the 2DS was. I was so very wrong again. Look, I bought a TurboDuo and 32X when they were new. Clearly I can't tell which systems are going to succeed or fail.

I bought the 3DS after the Zelda-themed variant that included A Link Between Worlds was released. That sort of became a dedicated Zelda system, I suppose the Wii U was essentially that for me too. I linked-up a Nintendo account to that and downloaded all the Zelda games available on the soon to die eShop. I bought the two 3DS remakes you see on the previous image.

I eventually bought a "New" 3DS again for no apparent reason. I didn't link my Nintendo account to it. I played Bravely Default on it which is longer than the three Zelda games on my list. I started, but didn't finish, Xenoblade Chronicles on it. You have to play that game for like 40 hours to just get through the intro. I think these could both break the top 3.

There are also some short games I spent many hours on.

So with regular DS excluded that list is fine. Those are three games I played a lot on the 3DS. It's good enough.

Will anything surpass these games?

I have incredibly short backlogs for each of these systems. I was pretty good about only buying games I really wanted for them and then actually playing them. I know, totally crazy. I also owned them when they were new. Compare that to the PlayStation... I literally worked the retail launch but didn't own one until the PlayStation 2 was out. It has a huge library of RPGs. I will never catch-up on my PlayStation backlog. If I somehow retired tomorrow and dedicated the rest of my life to playing PlayStation RPGs I don't think I'd catch-up. I don't have this problem with the Wii U and 3DS. I bought games when they were new and played them right away.

Like really, that's it. In the case of the Wii U, almost everything worth playing was ported to the Switch. I can't recall anything like that in a previous gaming generation. It's like if the Dreamcast launch titles were all Saturn games. That would have been laughed at in 1999. Over a decade later Nintendo looked brilliant for pulling it off. If not for the two HD Zelda remakes the Wii U would be an unnecessary system.

I know if I dug a little deeper I'd find a few dozen RPGs on the 3DS I missed. Buying 3DS RPGs once they're out of print is an awesome way to drain your bank account. Waiting to see if they get Switch (or later system) ports is fine with me.

These were both great systems for fans of Zelda games. For the Wii U that will be its legacy. It's hard to think of a system as being a failure when it has the greatest game ever (up until then). The legacy of the 3DS will be so much bigger since it meant different things to many people. It happened to be a Zelda system for me. For some it was a Pokemon system, for others it was an Animal Crossing system. I could go on with a dozen other game titles. The 3DS will probably be back some day. Maybe in the form of a dedicated console, maybe in the form of a virtual service, probably in a way I can't predict.

Until then - thank you to both of these systems for all the great memories. 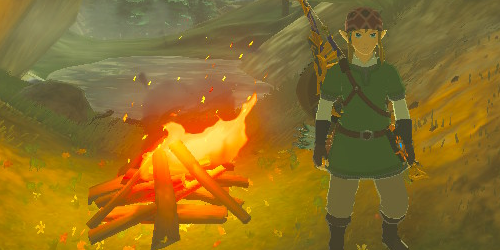 Camping of the Wild 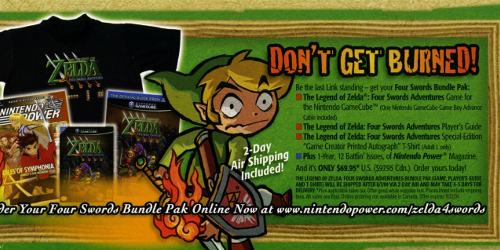