This is going to be a bit different than previous years. I over-committed myself in 2013 and wasn't able to keep up with this section. As a result I'm cranking it all out a few months late. As much fun as these sections are for me they don't really get all that much traffic so it's hard to justify putting too much effort in. So for 2013 there will just be small images and general recaps of what I found throughout the year.

Stuff from Half Price Books

My first visit to Half Price Books was fruitful. I snagged a really old programming book which for some unexplainable reason I enjoy reading. I also found a copy of Populous for the Super Nintendo for $5 and grabbed a random issue of Dragon magazine.

In February I saw an estate sale sign and made a detour to check it out. It was extremely depressing because the person who died was obviously my age based on the fact we had virtually the same CD and DVD library. He also had a decent Saturn library which I bought for $4 a game.

What I bought at the 2013 Midwest Gaming Classic

In March I hit the Midwest Gaming Classic and bought a ton of stuff. There are some cheap PC Engine games, Bust-a-Move 2 for Saturn, Metalhead for 32X, and a signed copy of Atari: Business is Fun.

In early summer I was up in scenic Sheboygan Wisconsin which has an incredible retro toy store called Freaktoyz. They have a ton of video games but I only bought these two this time.

Yard sales we're all that great this year but early on I found a copy of Mega Man X and one of the few Pico games I didn't own for a buck apiece. I never intended to collect Pico games but some time ago I realized I was only 2-3 titles away from having a complete set.

Defender of the Crown for CD-i

At the annual Video Game Summit show there was a vendor selling a ton of 3DO and CD-i games. Since I have a CD-i with no games I figured it was finally time to get one.

At another yard sale I scored a couple boxes of Dreamcast stuff for only $20. One of the highlights is that VGA adapter which I could probably sell to break even on it.

Hey it's a copy of Mario Teaches Typing 2 that I found at a rummage sale. Neat.

These were a late summer yard sale find. They only set me back a buck each.

On another trip to Half Price Books I bought some random clearance items. I already have about 100 copies of Doom but this one came with a poster so I couldn't resist. Now I just need to find an empty spot on my wall for it.

As the picture implies, it's a Game Boy Advance AC adapter for ten cents.

On another Half Price Books binge I found a sealed copy of Starblade for Sega CD for $15. NFL GameDay I bought because it was the second to last US PlayStation release and I'm obsessed with weird stuff like that.

At a fairly large yard sale they had a box of Game Boy Advance games for a quarter each. I didn't even bother to see what they had and just bought them all.

Yeah I already have a boxed Team Player but this was a buck so I guess I can unbox one now.

This was from a yard sale down the street from me. They had a bunch of PlayStation 2 games for a dollar each but I only bought Sonic Heroes because I'm really not interested in building up that library.

Found this beauty in the basement of an estate sale in late October. They only wanted $3 for it which was an insane deal.

Would be believe I went to Dollar General at 7:00 AM on Thanksgiving Day to get one of these for half price? 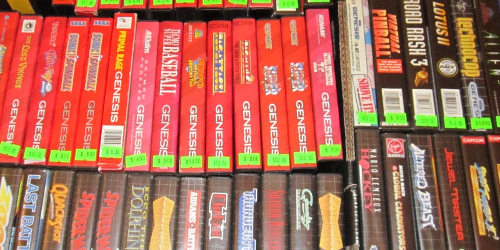