This year was OK, one semi-rare find and a few other decent things.

This has been on my eBay saved searches for a while and it's always overpriced there. On my first visit to Half Price Books this year I spotted it for roughly 1/2 of the going eBay rate. Neither game is great but it brings me one step closer to having a complete collection of the Mortal Kombat I & II home versions.

Seems like a trend might be evolving... I spotted an estate sale and decided to check it out. There were a lot of video games there but mostly overpriced N64 titles. I couldn't pass on this LCD game though. It wasn't an awesome deal but not a terrible one either.

I bought this at the same estate sale for the odd occasion when I travel with my Game Gear. It would have to be trip of under 2 hours though.

These were all on clearance at Half Price Books for $2 each. I have a ton of Intellivision games already but not many sports titles.

These came from a depressing estate sale. I say that because the recently deceased clearly had a computer hoarding problem. Every room of the house (OK, I didn't check the bathrooms) was filled with stacks of old computers and 3.5" disks. Given infinite free time I would have enjoyed ripping all the disks to preserve some long forgotten software. Lacking that, I filled a $10 bag with some games I'll actually play.

I was at a garage sale and spotted a binder filled with pogs for $5. I leafed through it out of curiosity when the guy running it said "you can have that for $2". Right as he spoke those words I spotted some neat-o video game pogs and took him up on his offer. The downside is I'm now stuck with ~200 pogs which maybe I can ebay to break even.

These were $1 each at a garage sale. They're probably all duplicates but as we've already established I have a problem.

These were $2 at Half Price Books. There were all in great condition because who really needs a guide for these games? "Chapter 1: How to randomly mash buttons and hope something happens"

Another garage sale find, everything here was a $1 each. I'm not sure if I'll like any of these games but for $1 they're worth a try. Arcade games start at a $1 now so I can justify these as being rentals.

This will probably go down as the best find of the year. I went to a nearby estate sale and this beauty was in a closet wedged between several old pocket dictionaries and other 90s devices made obsolete by smartphones. Priced at $5, they clearly didn't know what they had. Since video games at estate sales are usually horribly overpriced I didn't feel guilty.

Some random ColecoVision games from a thrift store for $1 each. I don't even own a ColecoVision so clearly I have a problem.

These were on clearance for $2 each at Half Price Books. I at least own both of these games.

The box was a little dinged-up but this is otherwise completely new. This is one of the better 3rd party Super Nintendo controllers so it's totally worth the price. 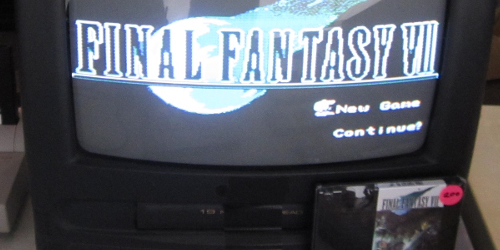