I've had two close calls with the Microvision so far. In 2012 I found an empty Microvision box. In 2014 I found a copy of Pinball but no system. At an estate sale this February I finally ran across a system. The box is in decent shape, the other one I found is better. The system itself has a lot of mileage on it, someone was a fan. At least it also came with two games that I didn't have, which is easy since I only have the one.

This was at an estate sale that I went to because it had a bunch of computer stuff advertized. In reality it was 99% office software. As you can imagine, someone who really loves Excel also enjoys golf. There a Venn diagram I could make here. Anyway, these were a quarter each. I will probably throw them out after ripping them.

To give you an idea of how little I went out looking for stuff in 2019... I only found this because it was a block from my house. One of my neighbors had a big downsizing sale so they could move to Florida. I can't wait to hear how that turned out a year later. This was the only slightly gaming related thing they had. This is actually one of my favorite finds. If I get more wall space I'll turn it into a decoration.

This was the only Nintendo item at a garage sale. They got rid of their Nintendo years ago and found this buried away. Yeah, I usually ask if they have more Nintendo stuff hidden somewhere and usually get half their life story in the process. I (obviously) already have a Powerpad but for $1 I couldn't pass on it. Now I have two decorative rugs in my gameroom.

I guess the Wii U is a retro system now?

Alright let's wrap this thing up with a late summer find. At a random garage sale I found some Wii U games for $2 each. I assume this is more than what GameStop offered them. I bought the two I didn't own already. I ended-up playing Super Mario 3D World a bunch so I guess 2019 wasn't a total wash. 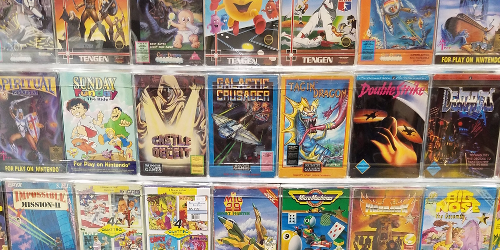