I bet you're really excited right now. An Electronics Boutique catalog from 1988 must be filled with tons of NES games right? The system completely ruled the world (of video games) that year. Certainly the store that you bought your Super Nintendo from had a great selection of games just a couple years prior..

Nope, at this point Electronics Boutique was largely a software store and for whatever reason didn't carry console video games. Console games were still mainly sold at stores like Sears. A random catalog from the previous year is a little bit heavier in the productivity software department. They obviously realized that when it came to Christmas season people were interested in fun things so this catalog is primarily devoted to computer games. Although Microsoft QuickC would be the item from here I'd most want to find under my tree.

Usual guilt-trip about how I don't run ads on this site or have a Patreon (if that's still around whenever you're reading this) or do anything at all to make money off this site. This is just a little holiday gift from me to anyone who enjoys looking at old catalogs.

This is a very 1988 cover, it looks almost exactly like the Trapper Keeper I was sporting at the same time. Kids today don't know what they're missing out on.

Wait!? Does that really say "Softwear"!? Is that a typo or an attempt at being cutesy? I can 100% imagine it being a typo and everyone just missing it because they glossed over the cover. Santa also seems to only have four fingers but that's expected, it would probably look like a space monster was holding the disk otherwise.

The thing that strikes me immediately is how much Commodore 64/128 software there is in here. I would have naively assumed that in 1988 the IBM compatible PC was completely dominant. Now of course it may have been outselling the Commodore 100:1 but the C64 had to still be in many homes then. This is why new Wii games were released up to 2019 (I am not joking). Even in the 1990 Christmas catalog they still list some C64/128 software. It looks like 1991 is when Electronics Boutique was done with the C64/128.

Even though there aren't any NES games, there are computer games that were also ported to the NES. The C64/128 and NES had similar CPUs so porting games was relatively easy (compared to porting a 16-bit arcade game for example). I haven't played the computer version of Platoon but it sure looks a lot like the NES version.

Out Run brings us our first Atari ST software sighting of the day. As for Pete Rose, I can't recall if we're supposed to think he's a pariah or a sympathetic figure who was overly punished for whatever he did.

I feel like Leisure Suit Larry is a series that maybe doesn't hold up well today. The adventure and puzzle parts are OK, in terms of difficulty it's somewhere between Monkey Island and King's Quest. What I mean is the series would cause all kinds of stupidity on social media. I think in general social media and YouTube influencing game development is the worst thing to happen to video games. Even worse than rumble controllers. Do you think for even one second that The Legend of Zelda would have been a better game if Shigeru Miyamoto considered the opinions of YouTubers? Or if it had rumble?

The best part of not trying to earn a nickel on this site is not caring about people boycotting the site or trying to chase away advertisers. So when I say social media and YouTube are terrible influences on game development I don't have to care if people think I'm attacking their specific political video game views. My view is everyone should just play games they like and stop caring about which games other people do/don't enjoy. If game developers do something you don't like then don't buy their game, there are literally thousands of others to choose from. Also everyone should spend less time on social media.

Oh, and I have no opinion on any of these games.

All this time I thought Zoom was a Sega game. If the Genesis version only had 27 splash screens with company logos at the start like a modern game I guess I would have known.

I like the idea of a game with a cassette that contains plot information. Cynically this could be considered copy protection, it just barely helps with that though.

If I understand correctly, Epyx mostly went out of business because they refused to produce NES games and instead hitched their wagon firmly to the Commodore and Lynx.

I haven't played any of these but I'd probably get into that Twilight Zone game. I get the impression it's only loosely based on the show. Like the developer came up with another graphical text adventure game and then stumbled into the license.

I keep trying to get into the Ultima series but for some reason it never takes. It seems like exactly the type of game I'd get into, I can't even really explain why I quit playing them so quickly.

That Rampage figure is seriously freaking me out. I played through Neuromancer something like 100 years ago, it was fine.

The Faery Tale Adventure is another game that I should like but I can't get more than a few minutes into it.

The Cinemaware IP has been passed around more times than I can count. One of the previous owners made most of their library freely available but a later one took it all down. I expect at some point I'll be at a yard sale and find a banker's box with "Cinemaware IP $5, or best offer" scrawled in marker on the side.

This is the war page I guess. It's weird to see Contra on anything other than the NES. First person to send me an email about how Contra was actually an MSX game before the NES gets added to my spam list.

I hear there's a reboot of Card Sharks coming soon or maybe even out already. I would watch if Snoop Dogg was the host. I am 100% serious in that statement.

Wheel of Fortune would also be better with Snoop Dogg hosting. Jeopardy would be a stretch because you need a little bit of a superiority complex vibe going. Alex Trebek comes across as someone who has mild contempt for the contestants on the show, like he'd sort of rather being doing anything else than talking with these people. I know it's an act but it would be difficult to find someone to replicate it.

My kids were completely mortified when they saw an old Family Feud episode. Contestants were smoking and Richard Dawson kissed every woman on each team whether they wanted to or not. It was quite a culture shock for them. Things that were common 40 years ago seem disturbing now, I get it. In 2059 there will be something extremely common today that people think is 100% mortifying. I suspect it will be Twitter.

Clubhouse Sports looks like a collection of mini-games that didn't make it into other games. The description of Captain Blood is really out there.

I don't follow Star Trek but I'm fairly confident that the late 80s was a low point for the series. I think Next Generation was maybe starting around this time but wasn't yet the beloved show it is now. If it was on, it wasn't beloved enough yet to get an Atari ST game. Maybe fans of the old series hadn't warmed up to it because I don't recall it being popular until the early 90s. I get that maybe you, the person reading this, loved Next Generation in 1988 and you think I'm a crazy person for not being aware of it until later.

I suppose due to NBA contracts there won't be another Jordan vs Bird type of game unless it used retired players. It was around the mid-90s when players could no longer appear in titular games or exempt themselves from NBA licensed games. "James vs Curry" doesn't have the same ring to it but would otherwise be a cool game idea.

Jet has the least inspiring box art ever. It's a like generic food at the grocery store.

Adult Poker is another game that would inspire thoughtful, intelligent conversations on Twitter.

Have I mentioned that Twitter is an awful thing no one should use? I gained at least 10 hours of productivity a week by quitting. You wouldn't be enjoying these scans if I hadn't. No, seriously, that is true. I gave up scanning and posting stuff due to a perceived lack of free time.

Everything on this page wins for my favorite box art in the catalog.

Am I correct in understanding that Wasteland was the inspiration for the Fallout series? It seems like something that would be true.

This is like a full 10 years before John Elway won a Super Bowl. At this point he was a few months removed from getting blown out in the Super Bowl by Doug Williams who did not get a video game, I'm just sayin'.

The Alf game was apparently bad enough to bury alongside two art programs for kids.

What exactly is that thing on the cover of Word Attack Plus? It looks like a dancing blood clot.

"Software Publishing" is a company name that gets right to the point. I suspect you'll hear about them again when some patent troll buys their IP and claims that they invented right aligned text or some other nonsense.

I bet that Apex 80 printer works 800x better than every printer I've owned this century.

QuickBASIC I've used and it was fun. It now seems like a good excuse to create a Windows 286 virtual machine.

I can't believe what people are charging for QuickC on ebay right now. I'm sure it's scarce, I've never stumbled across one for whatever that's worth. Free copy of Flight Simulator makes it a great deal in 1988.

This is it for Nintendo-related products in this catalog. I'm sure it took a lot of arm twisting to get Electronics Boutique to carry it. Lots of complaining that it doesn't appeal to their "core demographic" or whatever. Oh and by the way, that controller worked terribly on the NES.

When they were taking catalog photos and asked for a Tac1 joystick the response must have been "Tac1? Yeah we have this one that was used as a demo unit for like 8 years. That'll be fine right? What? Does it look like the one on the box? Yeah sure, why not."

I like how on the Gravis Joystick box they tried to peel off the Tandy sticker but failed.

I would legit use these boxes to store stuff today.

Back cover and store locations

I wonder how many of these are still open as GameStops in their original location? I can vouch for the Woodfield location but that's it.

Hey, thanks for reading this far and have a happy holiday season. 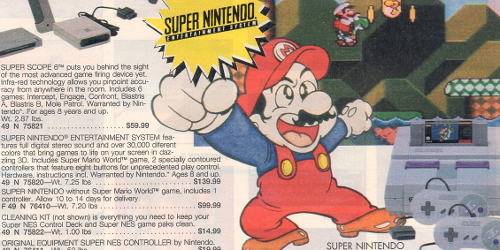 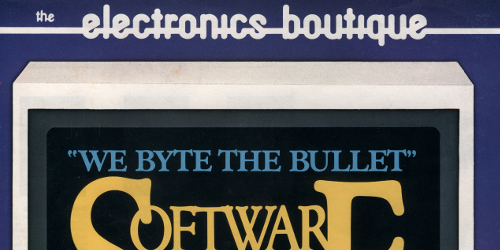 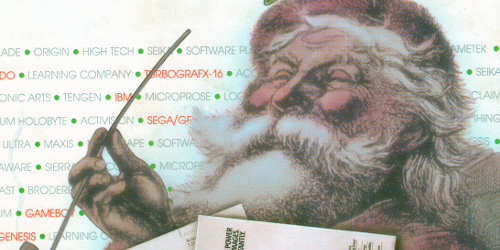