You don't need me to remind you how 2020 and 2021 went. I didn't leave the house a lot in 2020 but when I did I saw exactly one garage sale all year. It was outdoors so I checked it out and it was not worth the stop. Somehow I saw even fewer garage sales in 2021 which was surprising. In 2022 things were closer to "normal" - well, 2019 "normal". There are lots of people unloading stuff but very few good deals on games to be found.

Since I'm not finding a ton of deals, just for fun I'm including some things I saw but didn't buy. You'll understand why when you see them. Assuming I keep this section going beyond 2022, these items might outnumber the things I actually buy.

How are things going at Half Price Books?

I haven't been to a Half Price Books in two years. It's time to pay them a little visit. If you read through all the old pages in this section you'll notice I used to find tons of cheap games there. I wonder if that's still the case? Spoiler alert: that is not the case. They are now on average more expensive than ebay or at very least equal. I suppose there's the advantage of being able to see the games before buying them here. I don't expect to make many more visits.

$1 DS games at the library of all places

With commutes to the office starting again I needed to grab a few audiobooks. My local library also lends out games. I suppose almost all do. This still feels like a new concept to me. They also have a little room with an honor system cash box where they sell discontinued items. Apparently they started phasing out DS games in 2020 as they had several for $1 each. I will probably play Wreck-It-Ralph once then give it to Goodwill. That's totally fine. Radiant Historia is, I hear, a good RPG. It would be at least $30 at Half Price Books now.

Atari Flashback 7 for a whole dollar

The last time I bought a Flashback was in 2017. It was the 5th variant and cost $7. There is not much difference between these. This was at a sale where it looked like they were trying to clear out large items. It was on a table with a dozen board games and everything was $1. I suspect these are common at garage sales. People buy them out of nostalgia and get bored quickly. Not me. I have some version of these hooked-up to multiple screens. I throw one in my suitcase when I go on a business trip. There is almost no mini system like this I won't buy. I didn't buy this when it was new simply because it had nothing new to me. It is indistinguishable from the last one I bought except it has a couple extra games. It was $1 though. What was I supposed to do, not buy it?

I definitely don't need this. I already have a perfectly good way to sync my PSP. It's called "plug it into a Windows 7 VM". I paid $2 to try this sketchy "MAX Media Software Manager" in a VM to see what happens.

I might regret this. I have never seen this toy before. They wanted $20 for it and that seemed like not a good deal. The condition is worse than what this picture conveys. A picture can't capture the experience of an item that's been in a smoking home for 40 years. At a quick glace I can find the Pac Man part without the base unit for <$10 on ebay. That is surprising. I normally don't pass on original Pac Man merchandise but the condition was just too grungy. As I write this I am seriously second-guessing myself.

I think this section of my site will morph more into odd things I spotted while looking for games. How similar are Ponyz 2 and Pony Friends 2? How different are they from their prequels? Is "Keep the Faith 2000" in any way distinguishable from the 1999 edition? I'm not making fun of these games. Chances are one of my kids would have liked them 10 years ago.

I'm not presently in the market for a PlayStation 5. GTA 6 or the not-yet-announced Ys X would persuade me. Neither seem likely to happen in 2022. Even if Ys X was announced today it would be at least 2025 before the US release. Perhaps by then I'll be able to buy a PlayStation 5 safely. Based on this sign it sounds like I have to fight scalpers in a steel cage to get one today.

This was at a late summer garage sale. The couple running it were close to my parents' age. They had a table of what they called their son's junk. Based on what I saw we probably would have gotten along. There was a decent assortment of import PC Engine CD, 3DO, Famicom, and Saturn games. I already have too many of those and the prices weren't awesome. I suspect the parents looked them up on ebay, maybe the son priced them and dropped them off there. Whatever the case, it was neat to see import games at a garage sale. The one cheap item, and luckily the only thing I wanted, was this Family Boy Famicom clone. It clearly had a lot of use but for $5 it seemed worth the gamble.

Alright, let's fire this up and see if it works. I was expecting at least a few blank screens and restarts. Instead, I was pleasantly surprised to see it work every time. The colors and sound aren't bad either. It looks and sounds better than a Hyperkin clone I paid considerably more for.

Maybe I should have bought this

This was $12.99 at Goodwill. It's a Radio Shack device simply called "Arcade". A quick check of eBay shows this is an alright price. The thing is, I would just never use it. I have several things very close to this already that I never hookup. I should donate those to the Midwest Gaming Classic museum already. That's where this would end-up in 10 years if I bought it.

If I still had a Zip drive this would have been tempting. I've never seen a single episode of Star Trek. I'm not saying that to sound like a hipster. It's too big of a time commitment. If I ever decide to get into Star Trek it will be when I have enough time to watch it all. I hope Star Trek fans can respect that attitude. There are many other shows I put off for the same reason. Anyway, despite not being a fan I think this would have been fun to explore. I like weird old software and anything on a Zip disk is inherently weird & old.


So that's it for 2022. I didn't buy a lot and that's OK. I think I like the new direction I'm taking this section. I may not find many more great deals. Those days are gone until Gen-Xers start dying off in 30 years. Admit it, younger generations won't want your nostalgia just like I don't see you buying Baby Boomer memorabilia. If I outlive my peers then I'll score some great deals again. Until then, I think I'll keep this section going to chronicle the various retro gaming things I find for sale. 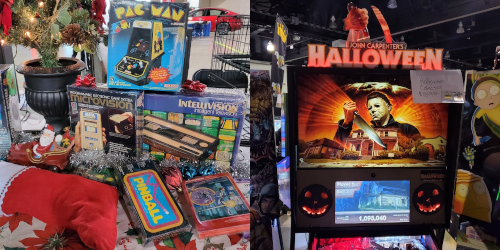