An ad that appeared on the back of the manual for Shining in the Darkness. 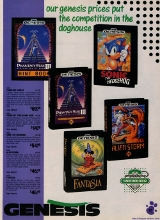 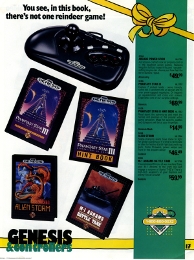 These pictures were all taken from online auctions. I'm not sure what the legality is but I have no moral dilemma on this. No one expected to profit from the photos themselves, no argument can be made about lost revenue. As for copyright, if anything these would technically be Sega's copyright not the photographer's or auction site's.

An assortment of Japanese Mega Drive packaging. The Japanese version of the poster is so much nicer than the one included in the U.S. release.

On the other hand, the Japanese cover was horrific.

Well, the U.S. cover isn't much better. Is the guy on the stairs supposed to be Rulakir or Siren?

The European box art is the same as the U.S. version.

Front and back of the Japanese cover.

The U.S. box and instruction manual.

A different assortment of Japanese packaging.